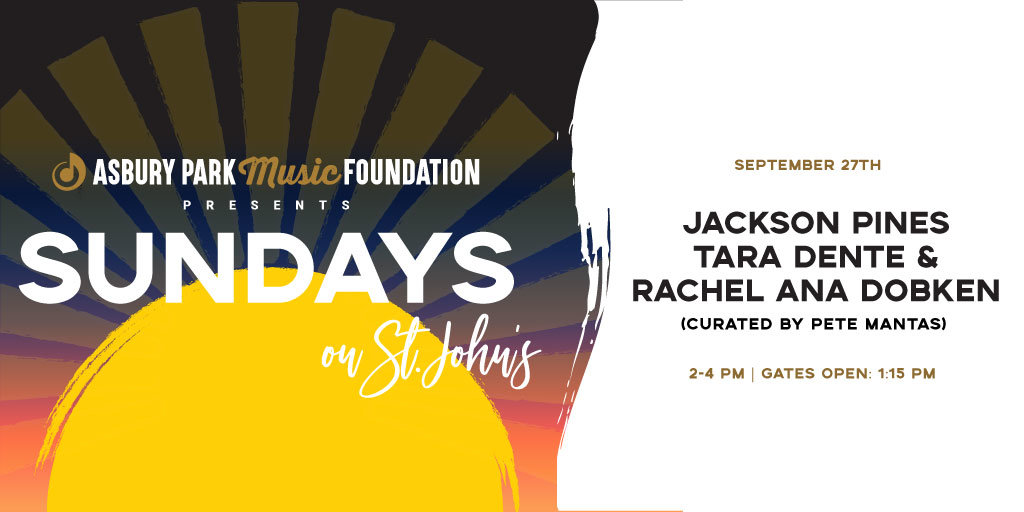 In order to adhere to social distancing guidelines, reserved spots will be marked and spaced 6 feet apart. You will need to wear a mask and bring your own beach chairs or blankets and drinks. Limited snacks and water will be available for purchase. There are no restrooms on St. John's Island, and dogs will not be allowed. Gates open at 1:15pm. There is parking in many locations surrounding Sunset Park (both metered and free) or you can walk or ride your bike. Please note that donations will graciously be accepted, but they do NOT count as an entry ticket.

Jackson Pines play original music crafted from their experiences on the road and in their home town in the Pine Barrens. Using mostly acoustic instruments, like guitar and stand-up bass, they reinterpret American folk music and weave stories about people they've met, places they've been, and the joys and trauma of modern American life. Joined by childhood friend Santo Rizzolo on drums, Jackson Pines are elated to be performing for their first live audience since this past February. Although they have had to postpone the recording of their new record, they have recently released their entire Philadelphia Folk Festival set from this past August as a concert film on their website: www.jacksonpines.com. Although their sound and sentiment may harken back to an era lost to time and progress, their music and melodies suggest the best is still ahead of us.

Tara Dente is a folk/Americana guitarist and singer-songwriter. Her third album, "Truth in the Mud" is available everywhere via Travianna Records. Tara is an inventive songwriter with a powerful voice and heartfelt, whimsical stylings. She grew up around the sounds of Celtic music and spirituals later latching on to folk and Americana music. Her finger-picking style is a cornerstone of her sound.

Rachel Ana Dobken (drums, guitar, vox, piano, producer) is a powerhouse musician who studied jazz at Bard College. Self-described as “My Morning Jacket-meets-Lake Street Dive,” she has a knack for blending indie-rock and soul, and has been featured by BTRtoday, Relix Magazine, The Deli Magazine, Substream, Guitar Girl Magazine, Atwood, New York Times, Asbury Park Press, Star Ledger, The Aquarian Weekly & more. Her self-released and produced LP “When It Happens To You,” is out now.