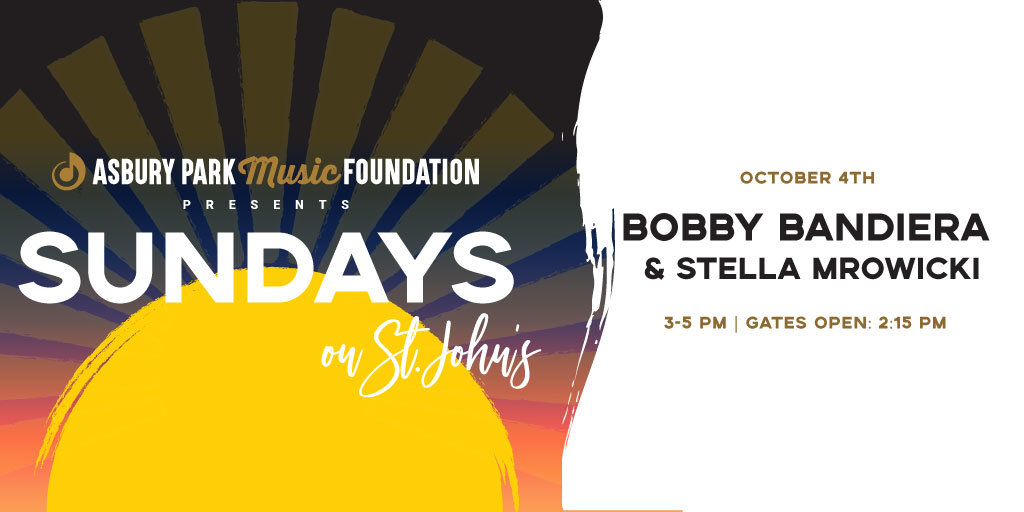 This series offers an intimate, acoustic show on St. John's Island, located in Sunset Lake off Grand Avenue between Fifth and Sunset Avenues in Asbury Park. Proceeds from the ticket sales, snacks, water, and our Music Saved Asbury Park merchandise will benefit APMF music education programs for under-served youth in Asbury Park and support local musicians who have been deeply affected by the Covid-19 lockdown.

Bobby Bandiera began playing in clubs over 45 years ago at the age of 16.[2] Originally, he was in a band called Holme from Orange, New Jersey.[5] They debuted in 1970, and were the house band for years at Dodd's in Orange, New Jersey, as well as D'Jais in Belmar, New Jersey, where Bandiera still makes occasional appearances.[5]

A long-time presence on the Jersey Shore,[6] Bandiera was associated with major acts. He was considered for the guitarist position in the E Street Band for the Born in the U.S.A. Tour in 1984, when Steven Van Zandt left the band, but this position went to Nils Lofgren.[7][8] In 1985, Bandiera replaced Billy Rush as guitarist for Southside Johnny and The Asbury Jukes but in 2010 left the band.[2][3] In the mid-1990s, Bandiera and Southside Johnnymade a number of shows as a duo. Bandiera has also played with Dave Edmunds,[9] and has his own band, The Bobby Bandiera Band, which performs regularly in the New Jersey area when Bandiera is not on tour. Bandiera has had an active solo career, releasing three albums and often playing during Springsteen's Asbury Park holiday shows of the early 2000s.[6] His most famous song is "C'mon Caroline," which he co-wrote with Bob Burger, another talented Jersey shore musician. He also does studio musician work and has appeared on albums by Cyndi Lauper, Patti Scialfa, and others.

In 2003, Bandiera toured with Bon Jovi during This Left Feels Right Live session. From 2005 until 2015, he played rhythm guitar in Bon Jovi's live performances.[7] According to Jon Bon Jovi, he is on "permanent loan" to the band from Southside Johnny (having not played with the Jukes since 2010).[1][2]

Stella Mrowicki is an American singer/songwriter and producer from the Pine Barrens, New Jersey. Stella's music authentically unites sounds of old and new folk music, taking inspiration from and drawing comparison to a wide variety of acts such as Bob Dylan, Townes Van Zandt, John Lennon, Suzanne Vega, Lis Phair, Mazzy Star and Cowboy Junkies. She released her self titled LP in March of 2019 before traveling to Austin Texas to perform at SXSW. The LP was later listed under the Top 10 Albums of the Year and the Top 10 Songs of the Year ("War Song") in New Jersey Stage Magazine and the Aquarian magazine. The album's successful recognition earned Stella the honor of New Jersey Stage Magazine's Songwriter of the Year at the age of 20. Stella has been featured in numerous publications including "31 New Jersey bands you need to hear in 2020" (NJ.com) and The 9 Jersey Musicians you need to know in 2020" (Asbury Park Press)