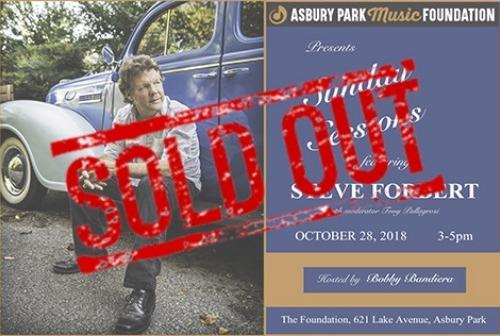 The Asbury Park Music Foundation’s recurring series Sundays Sessions with host Bobby Bandiera will feature a short Q&A by former Asbury Juke,Tony Pallagrosi, followed by a special musical performance. Steve's new book, BIG CITY CAT: MY LIFE IN FOLK ROCK will be available for sale and signing after the show.

More than four decades have passed since Steve Forbert made his way to New York City from his Meridian, Mississippi birthplace in quest of a career in music. It was the most unlikely time and place for a folk singer to leap into the fray in a burgeoning scene where new wave and punk were emerging while he took the stage as a the archetypal folkie, armed with just an acoustic guitar and sheaf of very personal songs. After busking on the street for change from passers by, he rose to sharing bills at CBGB’s with the likes of Talking Heads, The Shirts and John Cale as well as headlining more traditional venues such as The Bitter End and Kenny’s Castaways. Against staggering odds, he found blazing success early on with a string of critically acclaimed and commercially accepted albums including Alive on Arrival (1978), Jackrabbit Slim (1979), and Little Stevie Orbit (1980) and a most unlikely smash hit single, “Romeo’s Tune.”

*Donations will graciously be accepted, though they do NOT count as an entry ticket.

This event has ended