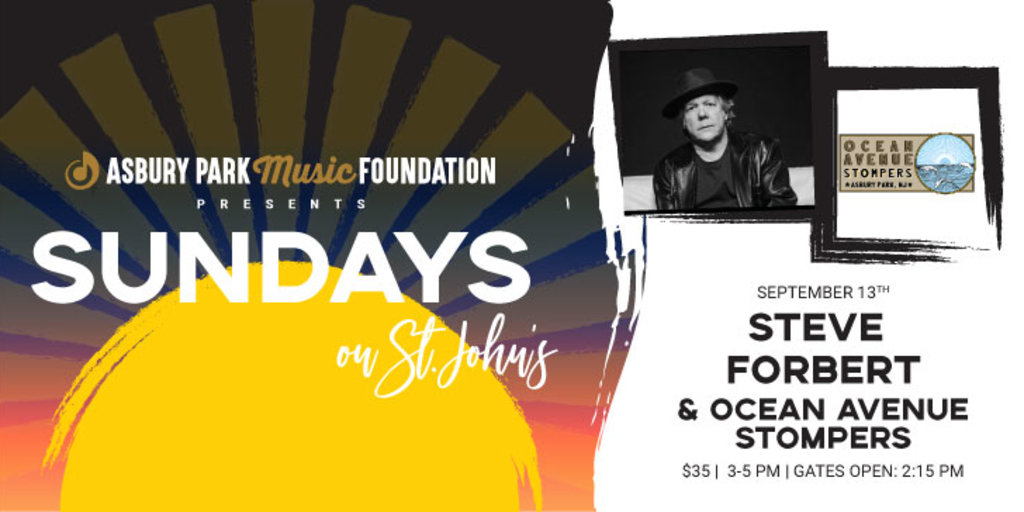 The Asbury Park Music Foundation is thrilled to bring you a new fall acoustic music series, Sundays on St. John's. Our first show will be presented on September 13th from 3-5pm, featuring Steve Forbert with an opening performance by local favorites, Ocean Avenue Stompers.

This series offers an intimate show on St. John's Island, located in Sunset Lake off Grand Avenue between Fifth and Sunset Avenues in Asbury Park. Proceeds from the $35 ticket sales, snacks, water, and our Music Saved Asbury Park merchandise will benefit APMF music education programs for under-served youth in Asbury Park and support local musicians who have been deeply affected by the Covid-19 lockdown.

In order to adhere to social distancing guidelines, reserved spots will be marked and spaced 6 feet apart (spots are for 2 people each). You will need to wear a mask and bring your own beach chairs or blankets and drinks. Limited snacks and water will be available for purchase. There are no restrooms on St. John's Island, and dogs will not be allowed. Gates open at 2:15pm. There is parking in many locations surrounding Sunset Park (both metered and free) or you can walk or ride your bike. Please note that donations will graciously be accepted, but they do NOT count as an entry ticket.

More than four decades have passed since Steve Forbert made his way to New York City from his Meridian, Mississippi birthplace in quest of a career in music. It was the most unlikely time and place for a folk singer to leap into the fray in a burgeoning scene where new wave and punk were emerging while he took the stage as the archetypal folkie, armed with just an acoustic guitar and sheaf of very personal songs. After busking on the street for change from passersby, he rose to sharing bills at CBGB’s with the likes of Talking Heads, The Shirts, and John Cale as well as headlining more traditional venues such as The Bitter End and Kenny’s Castaways. Against staggering odds, he found blazing success early on with a string of critically acclaimed and commercially accepted albums including Alive on Arrival (1978), Jackrabbit Slim (1979), and Little Stevie Orbit (1980), and a most unlikely smash hit single, “Romeo’s Tune.”

Established in 2016 by trombone player Ian Gray, Ocean Avenue Stompers is a brass band based in Asbury Park. NOLA-inspired, funk/soul infused, and mixing in hits from the 70's, 80's, and up to today, they are currently available for fun and safe distanced front yard appearances for any celebration! It’s all about love and happiness.

No tickets are available for this event.