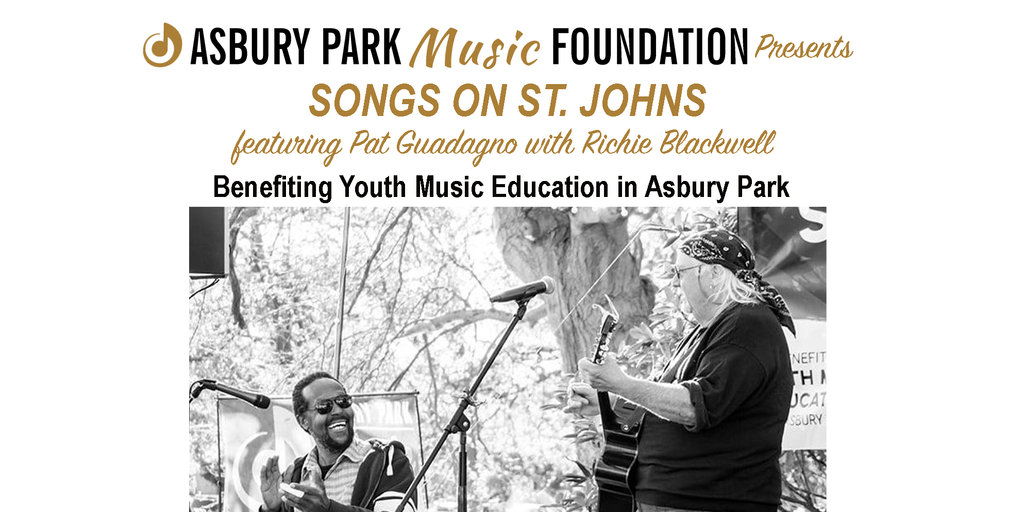 The Asbury Park Music Foundation is excited to announce a pop-up acoustic concert on Sunday, October 17th featuring one of our favorite troubadours, Pat Guadagno who will be performing with legendary musician, Richie Blackwell.  Singer/Songwriter, Carolann Solebello will be the opening performer.

Audience will need to bring their own beach chairs or a blanket. Due to space constraints, dogs will not be allowed. There is parking in many locations surrounding Sunset Park (both metered and free) or you can walk or ride your bike. Please note that donations will graciously be accepted, but a ticket is required for entry.

This show is being presented by the Asbury Park Music Foundation and supported by the City of Asbury Park and Musicians on a Mission.

PAT GUADAGNO, a staple of the Jersey Shore music scene, Pat has shared the stage with such diverse legends as Stevie Ray Vaughn, Peter Paul & Mary, BB King, the Nitty Gritty Dirt Band, Don Imus, Tanya Tucker, Graham Parker, the Mavericks, Delbert McClinton, Keb’ Mo’, and Jorma Kaukonen (none of whom were aware of his presence, according to Guadagno).

According to the Asbury Park Press, drummer RICHIE BLACKWELL, a Freehold native, is mentioned twice at length in Born to Run, and Springsteen rhapsodizes about him. There are none cooler than Blackwell to the young Springsteen, who was childhood friends with his younger brother, David Blackwell. Blackwell still plays regularly at the Jersey Shore, often with Pat Guadagno.

CAROLANN SOLEBELLO is a performing songwriter born and bred in New York City. Best known to folk audiences as a founding member of Red Molly, she now tours both solo and with No Fuss and Feathers. She is a member of the Jack Hardy Songwriters’ Exchange and has won numerous songwriting awards. Carolann released her fifth solo album, Shiver, in February 2018.

No tickets are available for this event.